This year the tournament was expanded to include Visually Impaired archers and the inclusion of a round for those with less experience. This is part of a move to make the tournament a major domestic para-archery event. It meant that we staged the first ever World Record Status VI 30m round and we knew in advance that World Records would be set. We were delighted when all the available VI team members for the World Championships took part.
The ranking round on Saturday 27th was shot in sunshine but with tricky wind conditions. As all our international members were at the selection shoots the standards were not as high as normal, but Sandra Spinks, Steve Gill and Dai Davies all produced good performances and claimed World Archery Target Awards. World Record claims were also submitted for Peter Price and Roger Rees-Evans in the VI categories. Mention should also be made of John Phillips who the won the Short Metric round in his first ever competition. 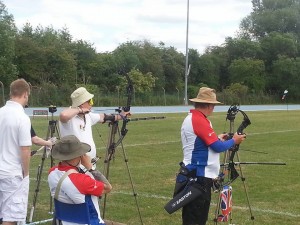 The Head to Head competition on the Sunday was a steep learning curve for the VI archers, as they’d never done them before, particularly the alternate arrow format used for the finals! The weather took a turn for the worse but there were some close contests nevertheless. The World Record Status winners were: Peter Price, Brad Stewart, Sandra Spinks, Leigh Bland and Amanda George. The last 4 are also British Wheelchair Archery Associations champions as well.

The BWAA Championships are sub-divided into classification categories and so congratulations to: Laura Swetman, Malcolm Tudor, Steve Gill, Julie Adnams Hatch and Andrew Sandilands on winning their classes. 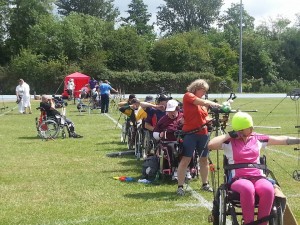 The Tournament is generously supported by Clickers Archery and the Worshipful Company of Fletchers. The archers would like to express their thanks to our team of volunteers, who provided agents and scorers for any archer who needed one.

You can get the results here:

Supporting disabled archers from grassroots to elite level with expert advice and coaching.